All Black's Book Launch at College

A sold-out crowd of more than 200 people were on hand at the College last night to mark the launch of Jerome Kaino’s autobiography ‘Jerome Kaino: My Story.’ Since he finished at the College in 2001, Jerome has become one of the world’s best rugby players, starring for Auckland, the Blues, and the All Blacks. The 2011 World Cup winner chose to stage the launch of his book at the College as a tribute to where his path to being an All Black great began.

The Pipes and Drums of Saint Kentigern welcomed the crowd, before Jerome was given a traditional Saint Kentigern entrance as he was piped onto the stage. He was introduced by the Director of Sport at the College, Martin Piaggi, who fondly remembers Jerome’s days as a student. ‘My lasting memory will be of Jerome in the 4x100m relay running for Cargill House,’ said Mr Piaggi. ‘When Jerome ran he had presence. He was tall, he was powerful. He oozed athleticism and expelled an air of confidence. You could tell that Jerome Kaino was born to compete and born to win.’

Jerome was then joined in conversation by renowned journalist and sports commentator Scotty Stevenson. The pair delved into all aspects of Jerome’s life, from his early years in American Samoa and then South Auckland, to his time at the College and transition to professional rugby player. Jerome says the College has changed dramatically since he was a student, with the addition of many new buildings. He was part of the first Saint Kentigern 1st XV to win the 1A title, and credited then coach, Tim Connolly as a major influence on him as a player and person. He shared the highlights of his career so far, including the memorable man-of-the-match international debut against the Barbarians and the tense World Cup final victory in 2011.

Following the interview, Jerome took questions from the floor, many of which were centred on the All Blacks’ chances in the upcoming World Cup. Some lucky youngsters got to take the stage with Jerome to ask their question and receive a signed rugby ball.

The night concluded with Jerome giving thanks to those who had helped with the book and its launch. He said it was an honour to be back at the College and host the event here. 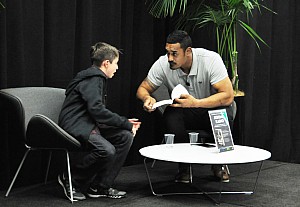 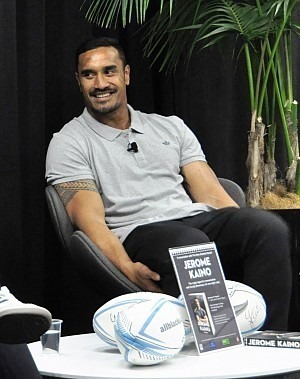 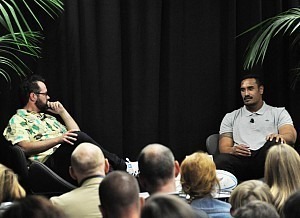