At the end of each year, the Sports Department hosts an Awards Dinner for over 500 people to honour our sporting elite and there is always much to celebrate - beginning this year with the opening of the phenomenal new extension to Sports Centre!

In a sporting year which featured Auckland, national and medal-winning performances on the international stage, a growing number of students received Sports Colours for being ranked in the top three individually in their sport in Auckland, or making an U18 or older age group national team. A further 33 students were chosen to represent New Zealand at an international event, with one student, Mahina Paul, having been selected for three international teams!

Our sports programme is deservedly one of the most diverse and successful in New Zealand and our players, coaches and managers can be proud of the efforts they have made to maintain that competitive edge, while inspiring our students to strive for their personal best in all they do - the emphasis being on personal best. Head of Sport, Mr Martin Piaggi opened the evening saying ‘Tonight, as we recognise the success of each and every one of you, I would like to theme the evening around ‘celebrating the journey’ rather than ‘focusing on the destination’ - there is more to success than winning.’ Quoting retired American speed skater, Bonnie Blair, Mr Piaggi said, ‘Winning doesn’t always mean being first. Winning means you’re doing better than you’ve ever done before.’

Sport at Saint Kentigern continues to offer many pathways for boys and girls, and not just through playing.  Sport also remains a vehicle to learn so many life lessons from perseverance and resilience to accepting direction, learning from mistakes, working with others and being humble in success.  More than technical and tactical skills, it offers the chance to be a better person. Every year brings a new focus and throughout 2018, our aim has been to continue to inspire students to pursue their sporting interests to the best of their ability, assisting them to learn and grow and readying them for life beyond Saint Kentigern.

Senior College Principal, Mrs Suzanne Winthrop paid tribute to Mr Piaggi, who finishes in his role as Director of Sport at the end of this year to take on the full-time responsibility as Director of Boarding at Bruce House. He has been the Director of Sport since 2001 when the College had 168 boys-only sports teams, 14 sports on offer and only 3 staff in the Sports Centre. Today we have 297 teams for boys and girls, 31 sports to choose from, a College roll almost double the size it was in 2001 and 10 full-time sports staff, as well as many other coaches working on contract for us. In 18 years, we have come a long way! Not only has Mr Piaggi ensured we have achieved excellence at the highest level, he has worked hard to promote and increase the participation percentage of Saint Kentigern students involved in sport. He reminds us that we are here for the benefit of our students and that they need to play for the ‘love of the game’ - for they will have a far greater chance of reaching their potential if they love what they are doing!

The evening builds to the most prestigious awards, with the talented Mahina Paul being crowned Dux Ludorum, the Premier Boys’ Hockey team named Team of the Year and the U18 DoubleSculls team of Harry Church and Alex McRobbie named for the Outstanding Performance of the Year.

DUX LUDORUM
Mahina Paul
The Dux Ludorum is the major individual sporting award of the year and is awarded to the most outstanding sports person, girl or boy. The winner is generally an all-round sports person who has represented the College at a number of sports.

Mahina was a member of the Premier Girls’ Touch team which won the Nationals in 2017 and have qualified to defend their title at the end of this 2018. She is a member of the Premier Netball team which placed 2nd in the greater Auckland competition. She plays in the New Zealand Open Women’s Touch team. Mahina scored the winning try in the last minute of the game to secure a gold medal for the Women’s 7’s team at the Youth Olympics in Buenos Aires. A talented, dedicated and hard-working young sportswoman, she was Girls’ Runner Up last year and is fully deserving of this year’s win.

BOYS RUNNER-UP TO THE DUX LUDORUM
THE BRUCE PALMER AWARD
Alex McRobbie
Alex won the College Athletics for Senior Boys, winning the 200m, 400m, the long jump and the high jump. He is a member of the history-making, National-winning U18 Double sculls Rowing team.

He is also a member of the 1st XV. Alex has signed to play rugby and attend university on a four year scholarship in Japan.

GIRLS RUNNER-UP TO THE DUX LUDORUM
Lisa Putt
Lisa placed 2nd in the College Senior Girls’ Athletics and went on to set new Saint Kentigern records for the long jump and the triple jump. She is a member of the   Premier Netball team which placed 2nd in the greater Auckland competition and 3rd at Nationals. She was named in the Tournament team for the Upper North Island Netball tournament.  She is s member of the Premier Girls Touch team who were the Auckland Champions and will defend their National title in December.

She is in the NZ U 18 Girls Touch team and was a member of the U18 Sevens team at the Sevens World Schools’ Tournament last December. Lisa was also named in the NZ Sevens wider training squad for 2018.

TEAM OF THE YEAR
Hockey Boys 1st XI Team
New Zealand Rankin Cup Champions, Super City Champions, Auckland Champions.
This team went through the season unbeaten. They won the Auckland Championships and the Greater Auckland Championships, scoring 82 goals this season and only conceding 9. At the Nationals, they were the only unbeaten team heading into the final of The Rankin Cup. Over the last 65 years we have had a number of outstanding hockey teams and hockey players, this team, however, achieved the ultimate goal. They sought to get better this year than last year. They sought to get better every training and every game this season. They sought to improve and although winning was always the goal, the focus was on improving. The end result was that they won the Rankin Cup.

JOHN IRVINE OUTSTANDING PERFORMANCE OF THE YEAR
Harry Church and Alex McRobbie, the U18 Double Sculls team
This award is for an individual or team which has achieved at the highest level and gained results reflective of their dedication, determination and desire to succeed. Finalists from all the other major awards have been considered for this award.

This team consists of two outstanding sportsmen. Individually, they have caught the eye of universities in the USA who recognise their talents.  At the end of 2017 and for all of Term 1, these boys trained hard. After placing 2nd at the North Island regatta, they headed to Twizel to compete at the Nationals. In an epic final they won the prestigious U18 Double Sculls. This is the first time in our 65-year history that Saint Kentigern College has achieved this feat.

THE STEVE COLE SPORTS TROPHY
Hannah Blake
This Award is presented to Sportsman or Sportswoman who epitomises the values identified by Mr Cole as the foundation blocks of our sports programme. ‘Respect for everyone, integrity for what we do, always deliver your best in the pursuit of excellence.’

Hannah has played in the 1st XI Girls’ Football team since Year 9. As a 1st XI player at the College, she has also played for the New Zealand U17 team, the New Zealand U20 team and the New Zealand Senior Women’s team. Throughout this time she never saw herself as ‘above’ playing for school. She is both a humble and very talented player.

THE GRANT DALTON LEADERSHIP CUP
Max Shorter
This cup is awarded to a leader who builds a team around them and demonstrates leadership qualities by helping others within the team to develop their skills.

Max has been the back bone of the Premier Boys Basketball team for the past three years. He has fought so hard for the team to be recognised alongside other premier teams within the College. In 2016, they ‘clawed’ their way out of the 2nd Division and into the Premier grade. 2017 was about survival in this grade and in 2018 it was about achievement. Max was so determined that the team achieve to the best of their potential. He was inspirational in the side being crowned the 3rd best Boys’ College Basketball team in New Zealand.

THE JEROME KAINO CUP
Adam Alovilli
The Jerome Kaino Cup is presented to a team athlete who ‘the team could just not do without.’

Adam has ‘blue and white blood’ running through his veins. He has already played for the Junior Black sticks and trained with the New Zealand men’s team. For Adam though, the Saint Kentigern team has so much importance. After winning the Super City competition he expressed his admiration and love for his team, his coach and this College. As thrilled as he was, he wanted the team to achieve one last goal and he came through with his promise and led his team to victory  in the Rankin Cup.

Alex competed in both the swimming sports and the Athletics sports at College, achieving in both.

YEAR 11 SPORTSWOMAN OF THE YEAR
Cecile Velghe
Cecile was the College Intermediate Girls’ Athletics champion winning the 100m, the 200m, long jump and shot put and placing 2nd in the discus. As an intermediate, she was a member of the Senior Girls 4x100m relay team that won the Eastern Zone and the greater Auckland titles. She is a member of the Premier Touch team which won the National title last year and has qualified for the Nationals this year. She is a member of the Premier netball team that were runners up in Auckland and placed 3rd at Nationals. She was named in the Tournament team for the Upper North Island championships.

YEAR 10 SPORTSMAN OF THE YEAR
Harry Lowe
Harry captained the Colts 1 Cricket team and also captained the combined Year 9/10 cricket team which placed 4th at the National competition. He was voted the MVP for this team and was the 3rd highest run scorer at the tournament scoring 187 runs. He also captains the 14A Football team

He played in the U15 Knock Out Cup Football team.

THE LEYTON MONK AWARD
YEAR 9 SPORTSMAN OF THE YEAR
Kiyaan Manukonga
Kiyaan was 3rd overall in the College Junior athletics winning the 100m the 200m and the long jump. He went on to the Eastern one competition where he placed 2nd in the 100m. At the Greater Auckland Athletics he made the final of the 100m and his team placed 3rd in the 4x100m relay. He was a key member of the U15 Open weight rugby team. He plays in the College Junior A2 Touch team. He is a member of the U15 7’s team which will contest the National 7’s competition in November.

YEAR 9 SPORTSWOMAN OF THE YEAR
Neve Webster
Neve placed 2nd in the College Athletics, winning the 800m and placing 2nd in the 1500m high jump and long jump and placing 3rd in the 300m. She went on to place 2nd in the 800m and the 1500m at the Eastern Zone competition. She plays in the 1st XI Girls’ Hockey team. She is also the College Cross Country champion. This year’s winner won the Auckland Junior Team Tag Duathlon and  the NZ Secondary Schools U14 Team Tag Duathlon. 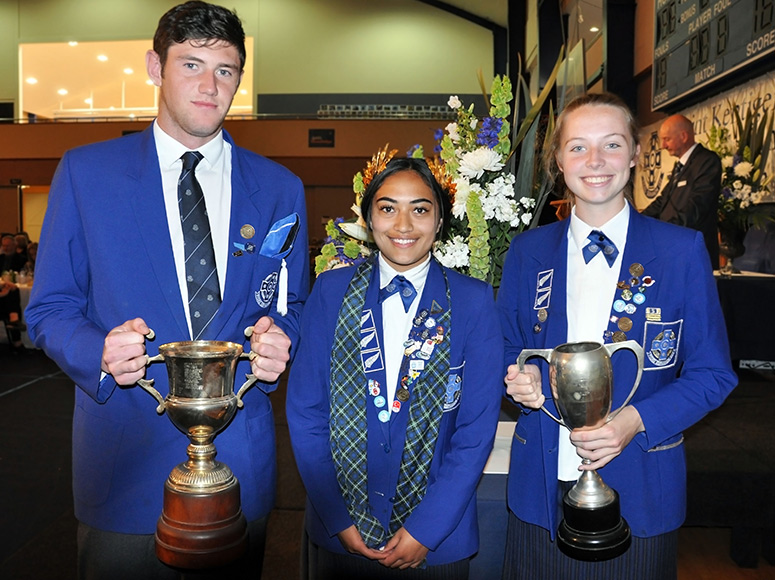 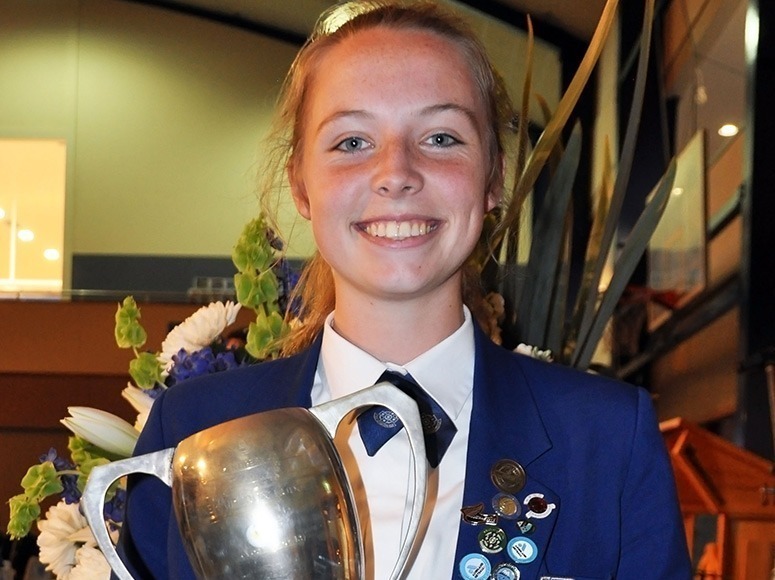 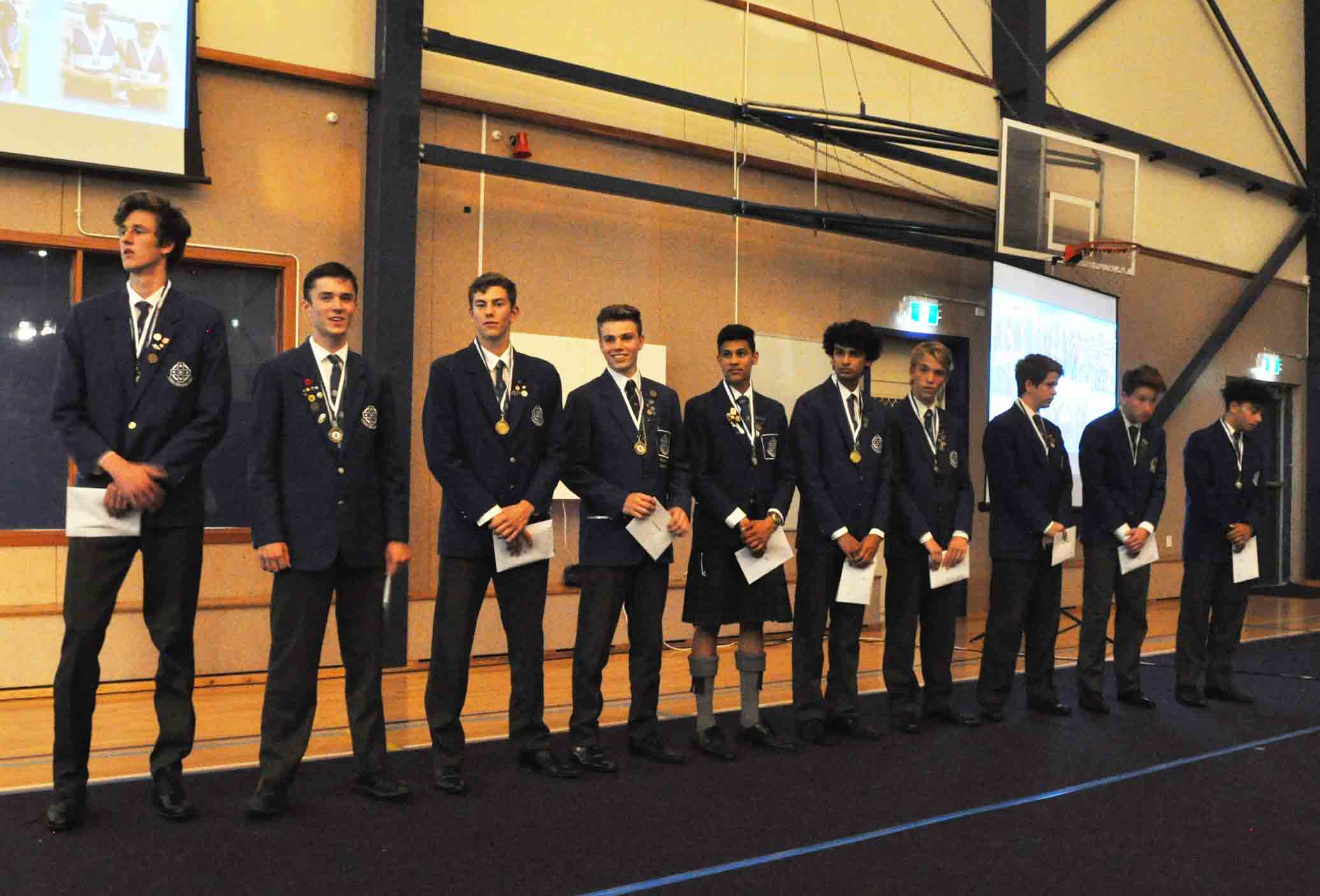 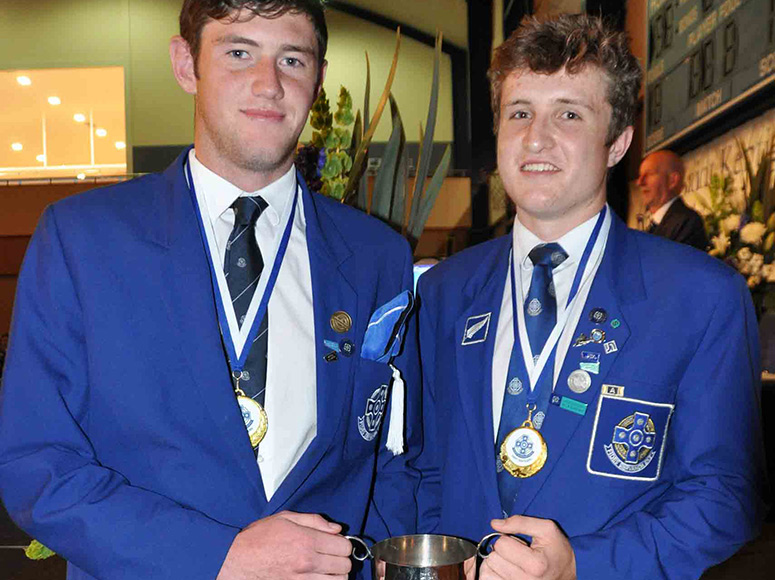 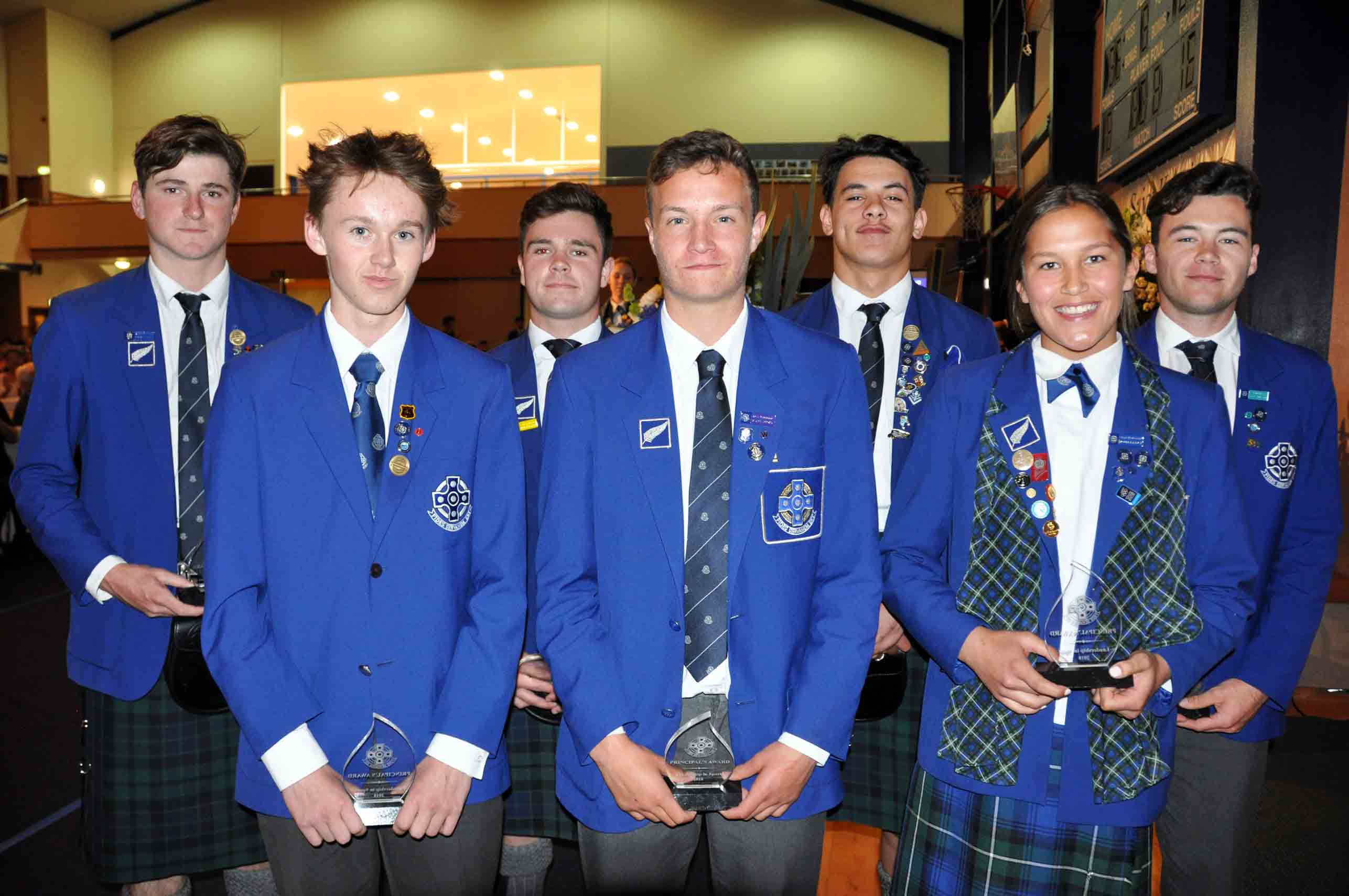 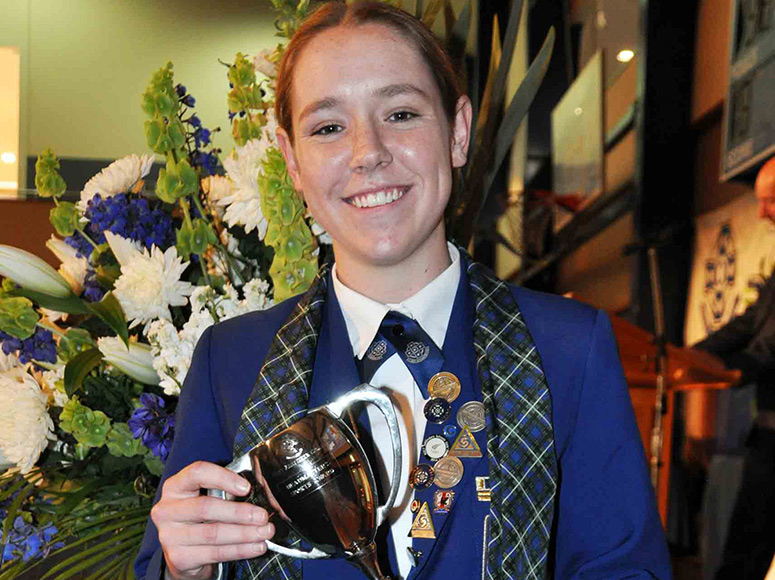 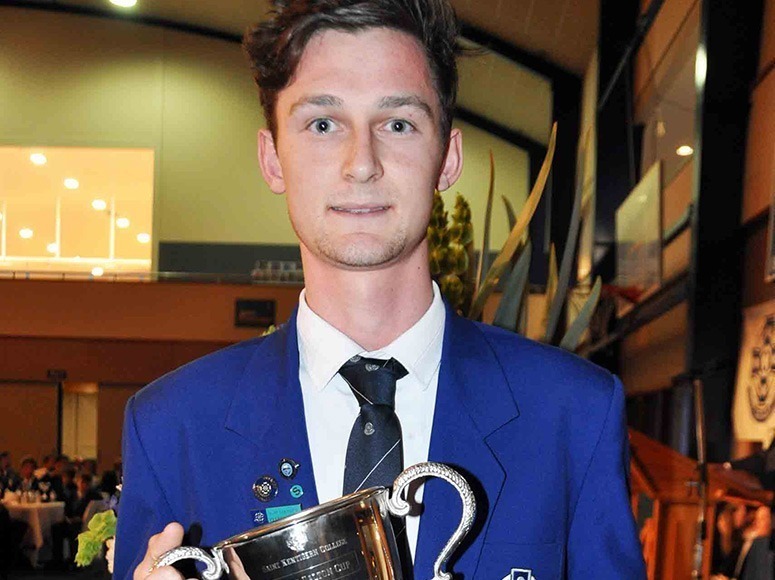 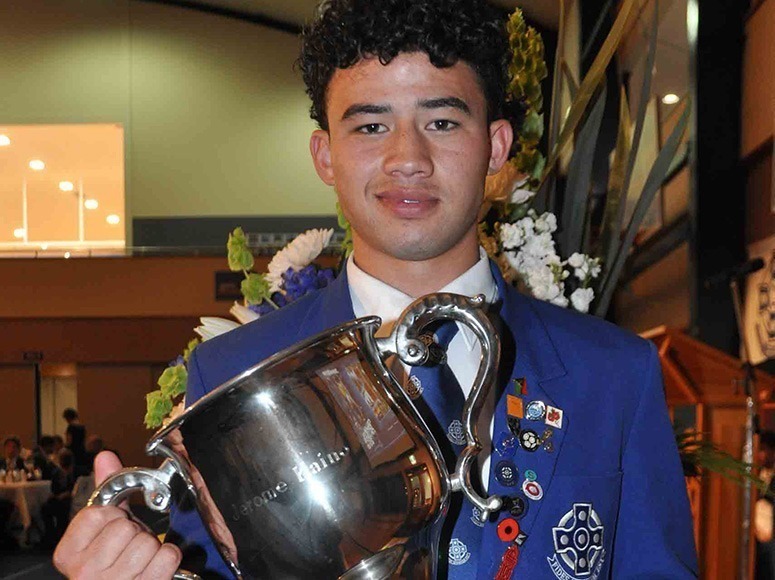 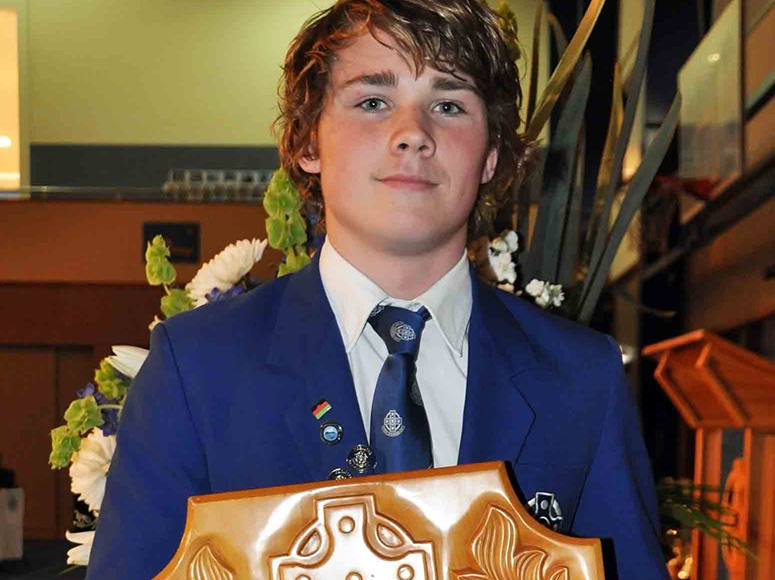 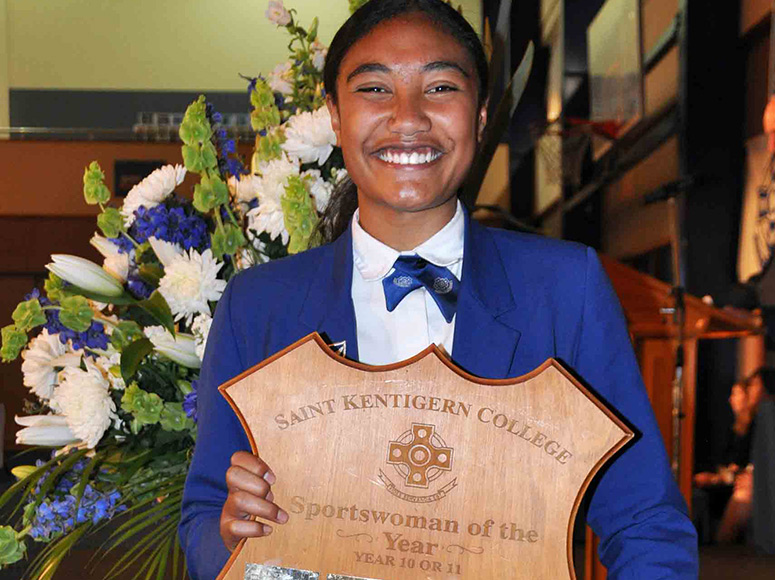 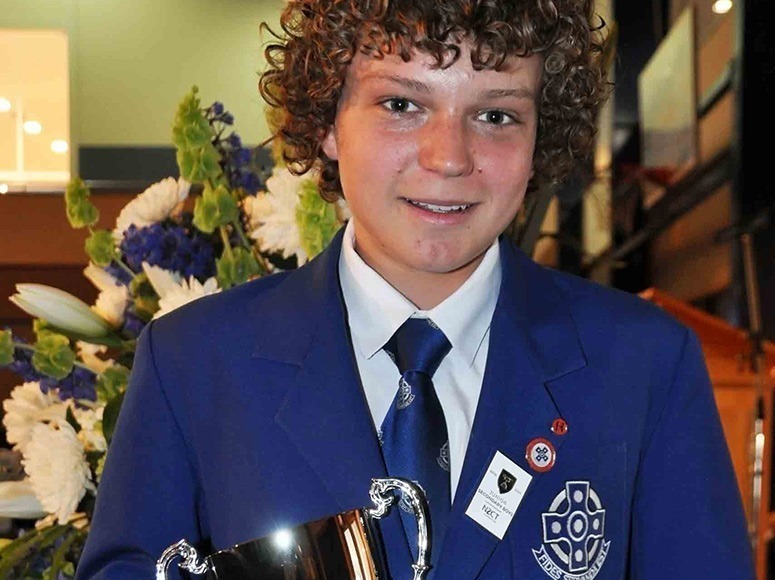 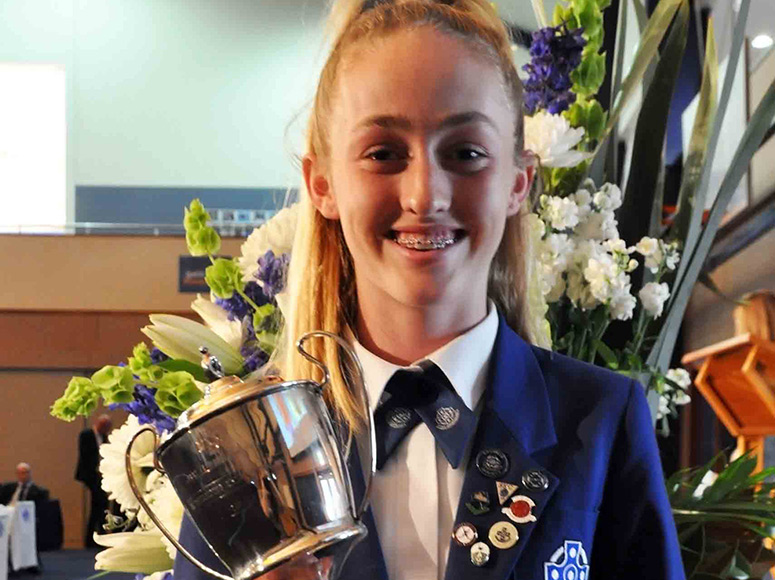 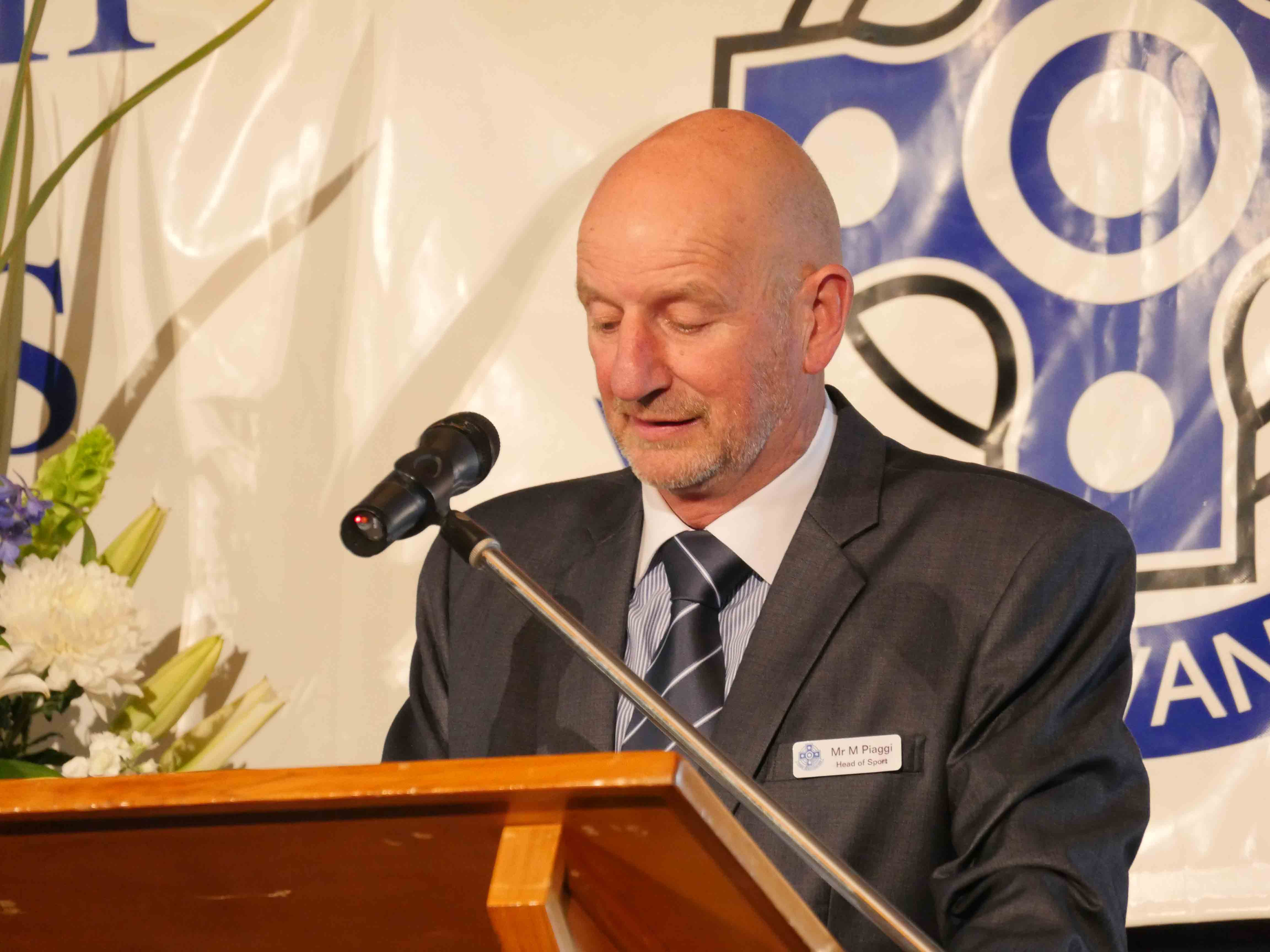 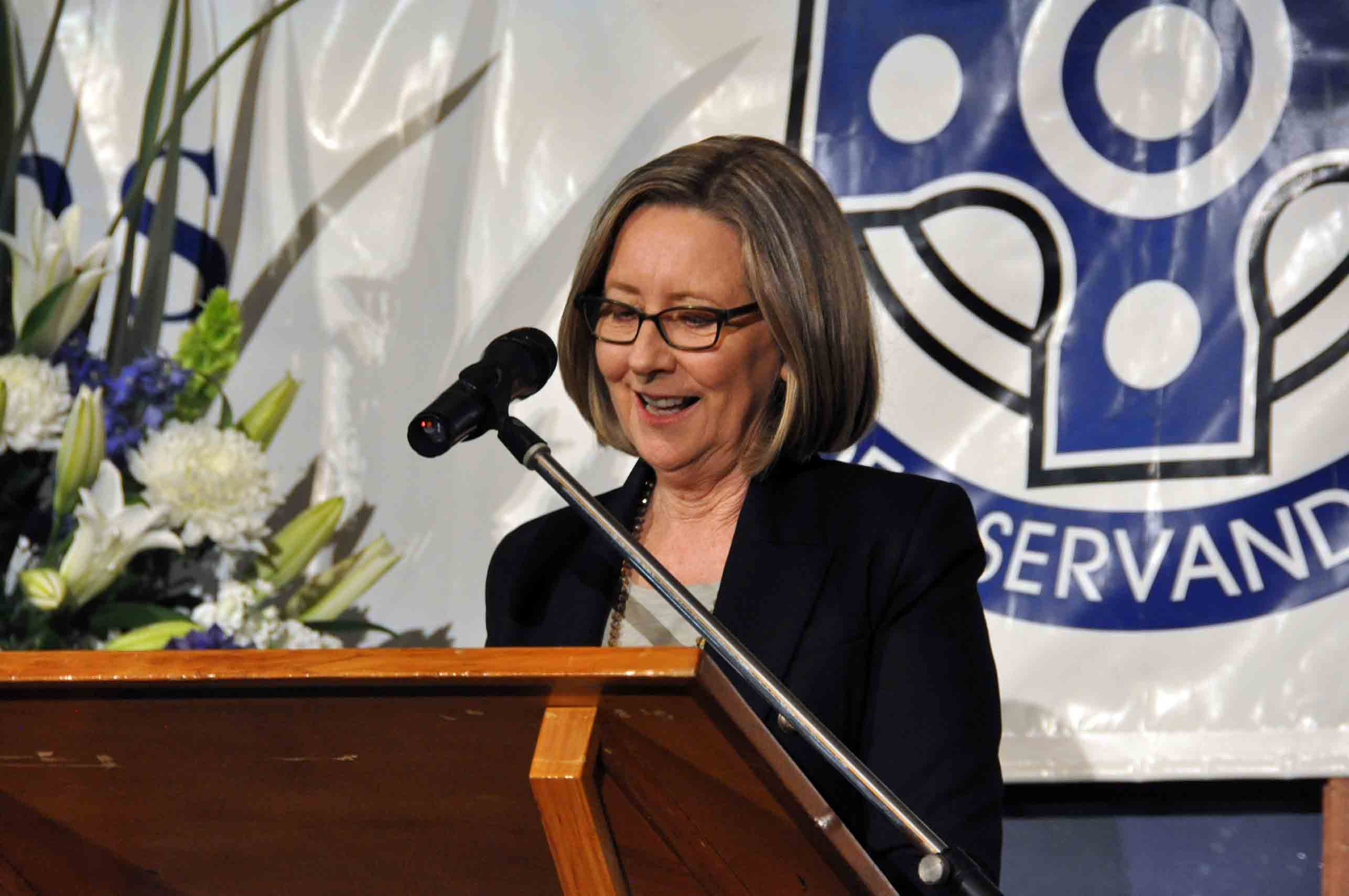